OAK held four virtual NOP scoping meetings with the public on May 25 and 26, followed by a formal public comment period which ended on June 7, 2021. Of course, the public is always able to communicate issues with the airport.  The NOP, a description of the Project, and directions for submitting comments appear at https://www.oaklandairport.com/terminaldevelopment/

The Project includes the following elements: 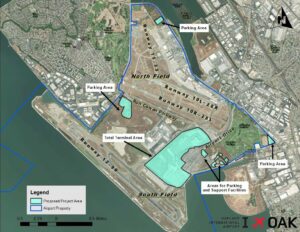 This project will facilitate increased aircraft operations and thus accommodate a larger number of flights, which translates to more noise events over CHBI neighborhoods. CLASS attended scoping meetings on the project and submitted comments on the NOP, focused on three issues affecting analysis of the project.

First, CLASS argues that the baseline for measuring noise impact should be current noise levels rather than pre-pandemic levels. This issue is important because the existing noise environment is quieter due to current reduced operations at the airport. If OAK uses the year 2019 as a noise baseline, the projected increase in noise levels in our community would be considerably underestimated.

Second, CLASS emphasizes the need to evaluate all impacts of growth in aircraft operations that will result from adding 17 aircraft gates, a 60% increase in flight capacity. In addition to noise, these impacts include local air quality, greenhouse gas emission, and public safety among others

Third, the gates of the new terminal would be closer to Runway 28 than existing gates.  Aircraft captains, not OAK, decide which runway they will depart from.  The commercial jet airstrip, Runway 30, is 65% longer and targets takeoffs toward the edge of the bay, but some captains may opt for shorter taxi time.  Departures from Runway 28 point over the heart of Harbor Bay, resulting in much greater noise pollution in our neighborhood.

CLASS representatives continue to participate in stakeholder and working group meetings to stay abreast of project details as they emerge; to advocate for a thorough environmental analysis; and to encourage a project design that will protect our community from excess overflights and aircraft noise.

We encourage you all to learn more about the project and to stay engaged through the environmental review process, now and in the future, by voicing your questions and concerns.

If you would like to be added to our reistration list and receive updates and meetings events, please complete the form below.